The photographs may appear very disturbing to a beekeeper but in actual fact are the least of our worries. The mites are Parasitellus Fucorum and are usually found with the bumblebee, either as a jockey hitching a ride, or in the bumble bee’s nest where it lives on old wax and debris.

According to some observers it doesn't bother with the honey bee but it has been found in honey bee hives, and these pictures support that as these were taken of the mites on the floor of a hive in Ross-shire, by a member of the Dingwall and District Beekeepers Association.

The mites will feed on dead bees, but the only problem the bee has with these mites is that if too many of them hitch a ride this will eliminate their ability to fly and thus the bee will perish.

Note that if you enlarge the pictures you will see that to the untrained eye these little mites could be mistaken for varroa.

I’ve seen these in our colonies in Dundonnell so they are not uncommon. Perhaps where colonies of honey bees are being treated with chemicals for varroa these mites will also be killed off.

Please let us know if you find any.  You will most likely find them on your varroa inserts. 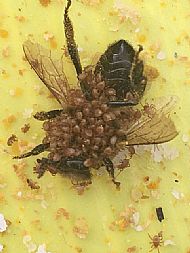 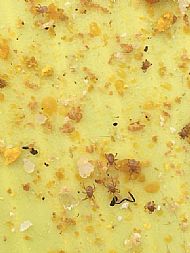